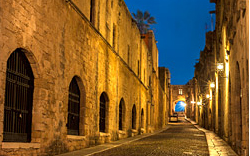 The architecture of the walled Medieval city of Rhodes is dominated by the Western European style of the time and was mixed with local Aegean additions during the Knights period (1309-1522).

To these unique styles of architecture elements were added by Muslim Turks who occupied the island in 1523. The medieval city of Rhodes then fell into the hands of the Italians who took the Island from the Turks in 1912, the ideal place to gather the monumental wealth of the Middle Ages. 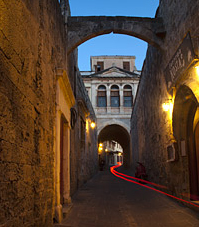 The specifics of the medieval city have the undeniable traces of the Knights of the phase, which, though often hidden beneath the Turkish alterations are highlighted and easily uncovered, making a unique case. It is protected by UNESCO as a World Heritage site.
It includes such important monuments as the Grand Master’s Palace, which houses the Byzantine collection of the island, the hospital of the Knights of the 14th century (Symi Square), the hospital of the Knights of the 15th century (Alexander Square) which serves as the National Archaeological Museum, The Knights Street which accommodates the different “languages” of  the Knights is the most well-preserved street in Europe, the Municipal Gallery of the Simi Square, the early Christian Baptistery in Argyrocastro Square, the old armory of the Knights which now houses the Folk Art and Folk Art museum, the ruins of the Temple of Aphrodite, the Suleiman Mosque, and the Palace of Catellano which now houses the Municipal Library. 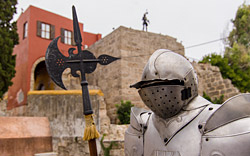 The perimeter walls are accessible all year round, and guided walks are available twice weekly during the tourist season.
Monumental is the Lady of the Castle, it is the largest and oldest surviving church in the Medieval city dating back to the 11th century A.D. Its original form belonged to the architectural style of the Cruciform Church with a dome, but it was converted into a basilica with Gothic nave vaults in the Knights period. The church had different uses over time. Originally an Orthodox Christian Cathedral at the time of the Knights (1309– 1522) it was established as the Catholic Christian Church and the Cathedral of the Latins, during the Turkish occupation it was used as a mosque and then until recently as a Museum. Today the church is in the hands of the archaeologists in charge of restoration. 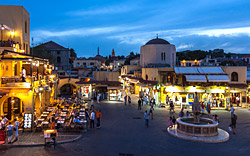 As well as the historical interests that draw many visitors, the Medieval City also hosts a wide variety of hotels, shops, restaurants, bars and nightclubs.
Free entrance 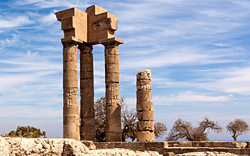 Visit the ruins of the ancient Acropolis of Rhodes and admire the important antiquities preserved in the beautiful archaeological park that is perfect for archaeological and ecological walks.

There you will have the opportunity to tour the restored ancient stadium of Diagoras and enjoy the sunset. Next to the stadium is a small marble theater which today hosts musical and theatrical performances, just as in antiquity. On the hilltop overlooking the Acropolis of the ancient Rhodes, where in-between the ruins stands some columns from the Temple of Apollo, testifying to the visitor all its ancient splendor. In the northern part of the Acropolis lie the broken ruins of the temples of Athena and Apollo. 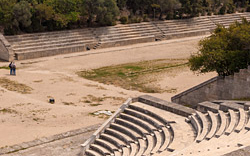 
The Rose Hotel (Grande Albergo delle Rose)
Built during the Italian occupation when the Governor of the Dodecanese was Mario Lago. It is of architectural interest as it is a combination of Byzantine, Arab Ottoman and Venetian lines. The construction started on March 26th 1925, and on May 24th 1927, the inauguration took place in the presence of local authorities and important personalities from Italy and Egypt. 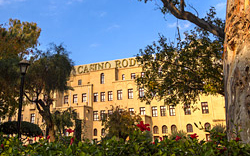 It had elegant furniture from the most famous houses of the era, the latest machinery, facilities and services that other world class hotels did not have. In 1929 the casino opened attracting many visitors. When on November 22nd 1936, the newly appointed Governor of the Dodecanese, Cesare Maria de Vecchi Conte di Val Gismon renovated it with a simpler style. It soon became a place of hospitality, accommodating large groups of jet-setters and celebrities of the era, as well as important historical events such as the signing of the Treaty establishing the State of Israel in 1948. After the incorporation of the Dodecanese to Greece, the hotel of the Roses became the property of the Greek State and the September 1955 administration of the company was “Astir SA”. Soon after it was passed to the city of Rhodes and in the mid 1970’s it stopped working until it was reopened by the company “Casino Inc” on April 2nd 1999 and continues its illustrious career in tourism.
Address: 4, Papanikolaou, Rhodes 85100, Greece
Telephone number: 22410 97500
Website:  www.casinorodos.gr 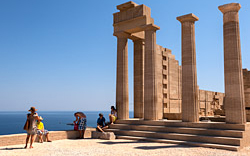 On the southeast coast of Rhodes, fifty-five kilometers from the city of Rhodes lies the picturesque village of Lindos It is famous for its narrow cobbled streets and white houses. The houses having floors and patios paved with ornate designs from pebbles (chochlakaki), painted ceilings, sofrades and walls adorned with brightly colored plates is one of the reasons why this village has been declared a landmark.

Worth visiting are the Captain’s Houses with their high walls and vaulted entrances (pyliones), coats of arms and heavy wooden doors, which were built during the period from the 16th to the 18th century, the Church of Our Lady of Lindos with studding frescoes of the 15th century in the village center, the Tomb of Kleovoulou a building of the 6th century which is in fact  the tomb of a wealthy family of Lindos and the grave of the “Archokrateion” from the Hellenistic period. Of all the Captain’s houses the only one you are able to visit is the house of Captain Papakonstantis.

Standing on a the top of a one hundred and sixteen meter high cliff is the Acropolis of Lindos with the Temple of Athena Lindia from the 4th century, the Propylaea [gates], the great Hellenistic Stoa and The Byzantine church of Saint John which was the governor of the Knights quarters. There is a second century BC carving at the base of the cliff.
For the Acropolis of Lindos:

Daily open except on Monday 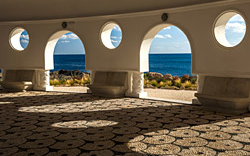 Located in the Eastern part of the island, nine kilometers from the city. The opening of the initial installation of Kallithea was on July 1st 1929, and has attracted a large number of patients and scientists from all around the world. The therapeutic waters of Kallithea are used for many conditions.
After a period of abandonment, the Kallithea Springs again opened its doors on July 1st 2007, after an extensive restoration project for this magnificent monument. It is an exceptional combination of nature, monumental architecture and unique history.
Next to the monument you can enjoy swimming in the crystal clear waters of the Aegean Sea 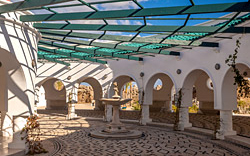 or stroll around the picturesque cove with its stunning natural beauty and artistic compositions crafted into pebble mosaics.

The specially designed rooms hold works from past and present artists, a permanent exhibition of photographs show the past and future sources of Kallithea, this area often holds organized cultural and artistic exhibitions, festivals, concerts and many other events. 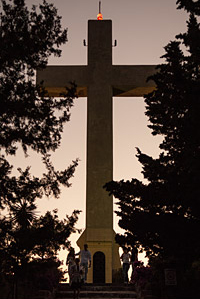 The ancient city of Ialysos extends around the hill of Filerimos, where you can find an the Acropolis of Ialysos and its ancient ruins, you may also find ruins from the byzantine and Knights period such as, the temple of Athena Polias dating from 2nd or 3rd century BC. In the Doric temple stands the foundation of the statue of Athena and some columns and pits, where figurines, pottery and metal objects where found. At the same site indications were found that the temple apart from worshipping Athena it was also used to worship Zeus Polieus.
During the early Christian period 5th to 6th A.D. a basilica was built and next to this a cross shaped baptistery. During the Frankish period the position became occupied by the Medieval Catholic Church Convent and Monastery Filerimos.
We could not mention the monastery without making specific reference to the icon of our lady of Filerimos. Called the Virgin Mary Full of Grace, it was the most sacred relic of the Order of the Knights, miraculous and unique. It is said that it was painted by Saint Luke and came to Rhodes from Jerusalem at the insistence of the Virgin, and placed in the crypt at Filerimos which is known today as the Chapel of Saint George Hosti. It is currently stored in Montenegro. 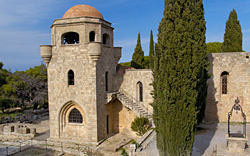 In the Southwestern area of Filerimos you can walk along the path named the Witness of Golgotha, this road was built by Latin Priests, and etched on 12 stone columns are the stations of the cross, the steps that the Lord made as he ascended Golgotha. At the end of this path one ends up in a small square, in the middle of which the imposing cross is located, identical that which existed in 1934. The view from a height of 267 meters is incredible.
East of the hill are some remnants of Byzantine period walls which were repaired by the knights. Filerimos is accessible on foot by a 4.5 km road through a fragrant, shady pine forest. About half way up, where you can stop to rest and drink fresh water, is the new Monastery of Prophet Elias and the old Monastery of Prophet Elias which has been newly renovated and is open to visitors.
Opening Hours: Daily and Weekends: 08.00-14.40, Monday closed
Ticket price: Address: Filerimos, Ialysos 85101, Greece
Telephone number: 22410 92202 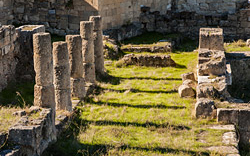 Ancient Kamiros was, with Lindos and Ialysos, one of the three ancient cities of the island, and an important commercial center for the Archaic of the Hellenistic Age. It was the most conservative of the three cities and supported the life and growth with agricultural production. It was discovered in 1929, during excavations in the region. It was built in the hillside overlooking the sea, without any fortifications or Acropolis.

In the archaeological site today are the ruins of the Hellenistic- Roman city of Kamiros and exact parts of houses and buildings, the Agora, the Doric Temple with a few arches, the Hellenistic Temple, the central street of the city, the ruins of the aqueduct and traces of the Temple of Athena. Near the archaeological site stands the Monastery of the Virgin Mary, in the same position as in the third century B.C. temple of Athena. It is located thirty kilometers southwest of Rhodes Town.
Opening Hours: Winter season: 08:30-14:40 Monday closed and
Summer season: 08.00-19.40, Monday 08.00-14.40 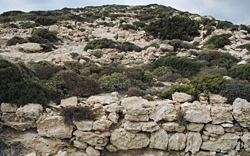 It is an ancient settlement located at the southernmost tip of the island of Rhodes opposite Prassonisi.

This ancient settlement had early organized city planning, but as finding have shown, life in the settlement was very limited. Today the small harbor is a safe haven for small fishing boats. 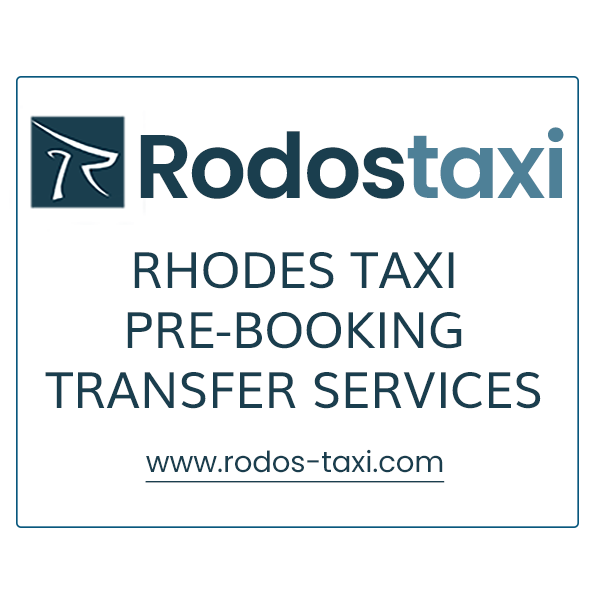 Book online a transfer from Rhodes Diagoras airport to your hotel and to any destination from your hotel.